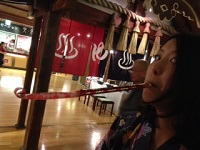 Research: Development of a novel bread containing porridge made from high amylose rice

Recently, owing to the rising price of wheat and excess supply of rice, bread made from wheat partially substituted with rice flour, is gathering attention. However, rice doesn’t contain gluten, a constituent in wheat which acts as the structure of the dough when it rises, and as a result, breads containing rice flour tend to expand less than those made from 100% wheat flour. Presently, there are products in the market containing rice flour, but from the reason described above, the substitution rate of wheat rarely exceeds 10% (except when gluten is added). Rice flour is attracting attention lately, as a new way of processing rice, an agricultural product that is very familiar to us. Rice flour is made from three steps: the harvested rice is polished, dried to facilitate the milling process, and milled. Compared to the rice we normally eat, it requires the two latter steps, which require time and money. Furthermore, once the rice is milled, the shelf life becomes much shorter than when it is kept as grains. In this research, we are aiming to clear the two problems described above and develop bread using 30% rice (without adding gluten powder), by using rice porridge instead of rice flour. Recently, many ways of adding rice to bread (instead of rice flour) have been developed, but we have found out that using rice porridge makes bread with a good texture and lasting palatability. Presently, we are consulting our former experiences and while using ingredients of low cost, developing a highly palatable bread through trial and error.